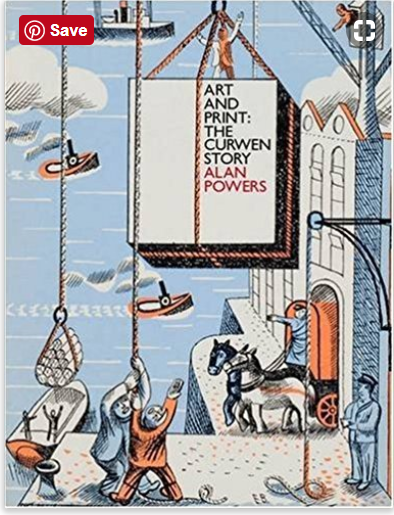 So many great prints and artists associated with this studio !

The Curwen Press, set up by the Reverend John Curwen in 1863, was initially concerned with printing sheet music, but made its name in the early 20th century as a printer of superb quality limited edition books. Using the newly developed technique of lithography, in the 1920s, the Press began encouraging young artists to illustrate their books and design end-papers and was soon commissioning such leading figures in the history of twentieth century British art as Paul Nash, Edward Bawden and Eric Ravilious to contribute artwork. Hugely influential in terms of book-design, many of these early editions are now highly sought after collector’s items. Publicity brochures and press advertising decorated by these artists aimed, in the words of Harold Curwen, to ‘put the spirit of joy into your printed work.’In 2008, The Curwen Studio celebrates its half-centenary. Set up in the late 1950s in response to a rising demand for original artists prints, the Curwen Studio was set up to work with artists and photographers in developing exciting new techniques in printmaking. Soon many of the most significant artists of the time were working at the studio. They included Barbara Hepworth, Patrick Heron, Henry Moore, John Piper and Graham Sutherland, who all produced prints under the management of Stanley Jones, whose skill and passion has continued to result in the production of truly unique prints and photographs at the Studio. His memories and experiences of working with a wide range of artists (from Paula Rego to the young Tracey Emin), demonstrate the potential of lithography as an expressive and experimental medium, and the skills required to maintain this freedom in a commercial environment.”The Curwen story” is one of an extended collaboration between artists and craftsmen-printers, unique in the art of the twentieth century in Britain. Charting the history of both publishing and print-making at Curwen, leading author on twentieth century British design Alan Powers looks at the role the Press played in shaping ideas of book-design from the 1920s onwards, and how artists working alongside Stanley Jones at the Studio have created prints that have helped to change public perceptions about Modernism.

via Artists at Curwen